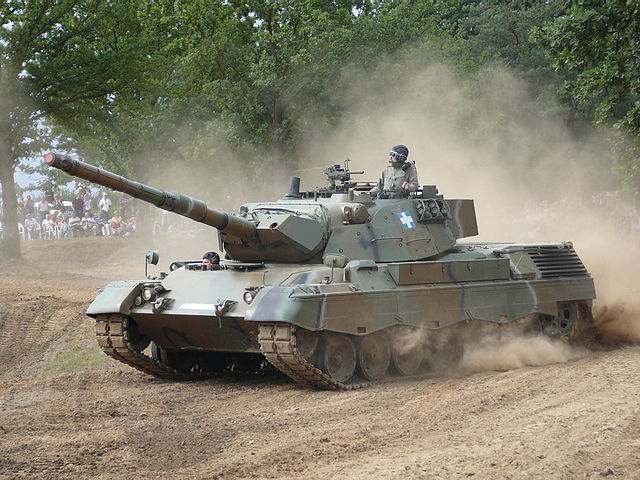 Leopard 1 is the main battle tank designed by West Germany and France and later joined by Italy. Development started in November 1956 when the operational require­ment for a new battle tank was formulated by West Germany, Federal German Armed Forces known as Bundeswehr.

In June 1957 Germany and France signed a co­ operation agreement to develop a common tank, designated ‘Standard-Panzer’. In September 1958 Italy joined the development program. This partnership was ended and the final design was ordered by the Bundeswehr. Full-scale production started in 1965. In total, 6,485 Leopard tanks have been built, of which 4,744 were battle tanks and 1,741 were utility and anti-aircraft variants. This number does not include 80 prototypes and pre-series vehicles. The building of the first prototype ‘Porschetyp 773’, had already started in September 1960 in anticipation of the official order from the West German Armed forces.

In August 1963 comparative tri­als were started and lasted for three months between the German and French designed prototypes at Mailly de Camp, Bourges, and Satory in France, and continued in Meppen, Germany. The trials demonstrated that the German tank had the edge over the French AMX-30.

Funding problems prevented the French from purchasing any new tanks before 1965. Change in defense policy and later leaving NATO by France in 1966 ended Franco-German efforts to produce a common or ‘Standard’ – Main battle tank and both countries went on to pursue their own tank devel­opment programs. The first AMX-30s were delivered to the French Army in the autumn of 1966. Italy decided to go with the American tank M60A1. On 1 October 1963, the ‘Standard’ tank was officially named “Leopard” later re-designated “Leopard 1” to differentiate it from the “Leopard 2”. On 22 August 1963, West Germany ordered 1,500 Leopards.

The Leopard quickly became a standard of European forces, and eventually served as the main battle tank in over a dozen countries worldwide. 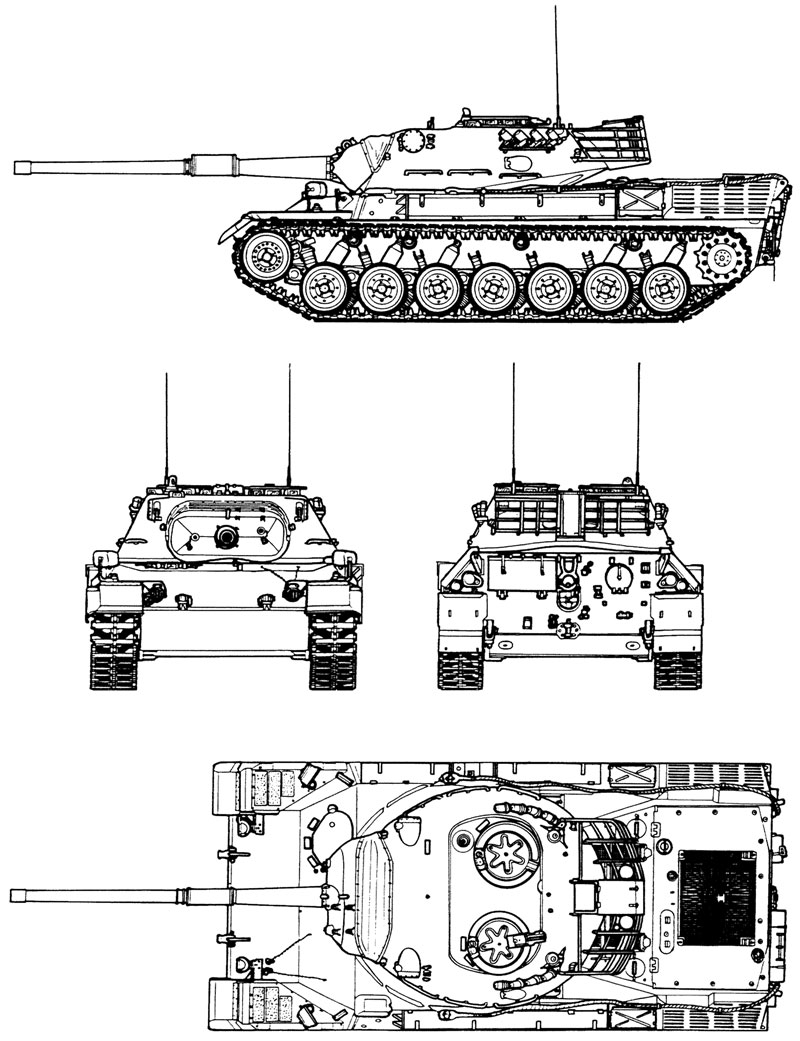 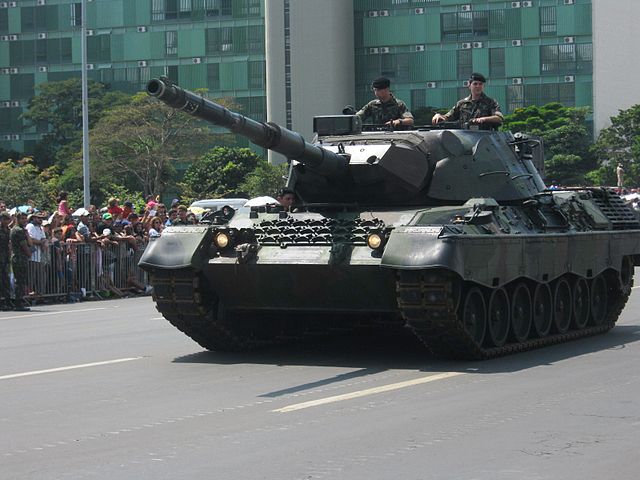 The Leopard 1 has an all-welded hull. The running gear consists of seven wheels per side. The driver’s position is situated to the right front of the hull. Protection is provided by a lift-and-swing type hatch. For driving under armored cover, the driver has three vision periscopes available. The Leopard 1 has IR-sight for night operations. The cast turret is mounted in the center of the hull and is manned by the com­mander and the gunner with the loader on the left.

An MG 3 is mounted for air defense, in beginning 7.62 mm MG 1 is used. This gun is operated by the loader, who has two observation periscopes avail­able when under armor. A total of 60 rounds are carried for the 105 mm L7A3 rifled gun. Various types of British, American, and German ammunition can be fired, including APDS, HEAT, HESH/HEP as well as smoke, canister, and target illumination rounds. The normal ammunition mix is 31 APDS, 26 HESH/HEP, and three smoke rounds. The gunner also has the telescope with a magnification of x8 available. Four 76mm smoke mortars are mounted to each side of the turret and can be fired either as single rounds or in salvo. The engine compartment is at the rear, separated from the fighting compartment by a fire­ proof bulkhead. The engine is normally run on diesel fuel (NATO designation F-54), consuming about 190 liters per 100km. A total capacity of 1010 liters, reduced to 985 liters on later Leopards. The Leopard 1 is able to ford water obstacles 1.20m deep (wading) without any special prepara­tions or loss of combat effectiveness. For fording at a depth of 2.25m (deep-wading) about ten minutes of special preparation is needed to seal the tank.

After 4th batch of tanks was delivered a modernization program was launched in 1970 to enhance the combat effectiveness of the Bundeswehr’s existing fleet. Most importantly, all Leopards received the Cadillac-Gage main gun stabilization system. Targets could now be acquired and engaged on the move, and the sys­tem significantly increased the probability of a first-round hit in a tank duel. The Leopard 1A1 also added the now-famous “skirts” along the sides to protect the upper tracks. Between 1974 and 1977 all of the machines in the first four batches were brought to the same Leopard 1A1A1 standard and given additional turret armor developed by Blohm & Voss.

The Leopard 1A2 Tank is quite diffi­cult to distinguish from the modernized Leopard 1A vehicles of the 4th batch. The Leopard 1A2 never received add on turret armor, but it did get an improved NBC protection system. The first 232 tanks of the fifth production batch were delivered with a cast steel turret of thicker armor and were designated as the Leopard 1A2 between 1972 and 1974.

LEOPARD 1A3 The remaining 110 vehicles from the fifth batch were fitted with a new welded turret incorporating spaced armor and a wedge-shaped gun mantlet. Although the degree of armor protection remained unchanged, the internal volume of the turret was increased by 1.5 m2. The improved TRP 2A independent sight was installed for the commander. Upgrades were identical to the 1A2 models.

The Bundeswehr took delivery of the first 250 vehicles from the sixth batch in 1974, designated Leopard 1A4. This version had the welded turret introduced with the Leopard 1A3, but with a new integrated fire control system.

From 1975 to 1977 all vehicles in the 1st to 4th batches, known as the Leopard 1A1 were retrofit­ted with additional turret armor developed by Blohm und Voss. The armor consists of steel plates with a two-faced rubber lining, being attached to the turret with shock-proof spacers and nuts. The gun mantlet received a wedge-shaped, add-on armor made of steel plates. Following modifica­tion, the vehicle was re-designated  Leopard 1A1 A1. The add-on armor increased combat weight to 42.4 tonnes.

In 1980 a research program was undertaken to study further improvements to Leopard 1, the aim being to maintain its survivability and combat effectiveness beyond the year 2000. it was planned to convert some 1,225 Leopard 1A1 A1. Tanks form 1st to 4th batches. In the event, one vehicle was destroyed by fire, reducing the even­tual total to 1,224. Re-designated Leopard 1A5, the first modified vehicle was delivered to the Bundeswehr in early 1987. Since then, almost all users of the Leopard 1 have also applied similar changes to their own vehicles, and in most ways, the 1A5 be considered the “standard” Leopard 1 today. 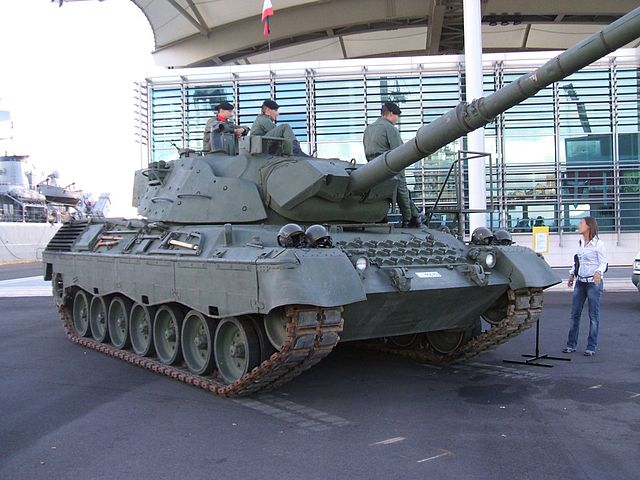 The Leopard 1A6 prototype was a single Leopard 1A1A1 testbed. This model was modified with additional armor on the turret, and equipped with a 120 mm L/44 gun. At that time Leopard 2 was in widespread service and the modification 1A5 offered a more reasonable upgrade path for a fraction of the cost. The project was ended in 1987.

In addition to theoretical education and simulator training, the Bundeswehr utilizes 60 Leopard 1 driver tanks delivered between 1978-79 by Krauss-Maffei. The turret is replaced by an obser­vation cabin with a dummy gun. The instructor, with appropriate devices to override the trainee driver like in-car school driving.

When the development of Leopard 1 began the need for a capable ARV was immediately recognized, as was the need for maximum commonality with the new MBT. The detailed design of the ARV started in 1962, headed by Porsche, and the first two prototypes were ready in 1964. After successful trials in 1965 production of the Bergepanzer 2 started. The first vehicle of 444 built being delivered in September 1966. Bergepanzer 2 replaced the obso­lete M74 and a number of M88s. 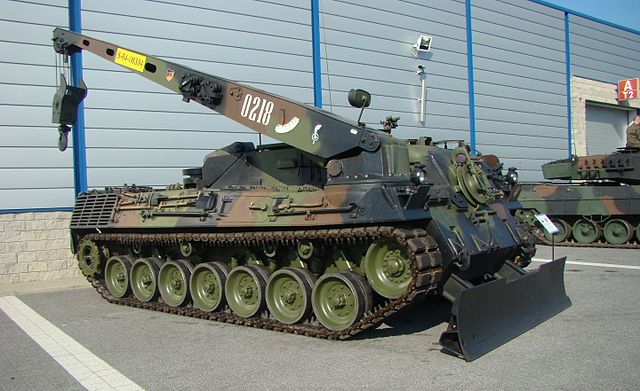 The vehicle being duly designed by Porsche in 1966 to fill the need for a special ACEV. Production of 36 vehicles for the Bundeswehr commencing one year later. Officially designated Bergepanzer 2A1, the vehicle is based on the ARV and special equipment includes an auger, stored on the engine deck, fitted to the crane jib, and hydraulically operated. The Pionierpanzer 1 is also equipped with electric cutting and welding equip­ment. The crane jib incorporates a ladder. All 36 Pionierpanzer 1 in German service were converted into Pionierpanzer 2 Dachs (Badger).

Following the demands of units equipped with the Leopard 2 and Gepard for an increased lifting capability, in 1978 MaK System delivered 100 improved ARVs. Improvements included an enhanced NBC protection system.

The German army was trying to find a low-cost solution and from 1981 to 1985 the Pionierpanzer 2 Dachs was developed. MaK System of Kiel was awarded the production/conversion contract. In April 1989 the first series vehicle of 140 ordered was handed over to Bundeswehr.

The development program for a bridgelayer based on a modified Leopard 1 chassis started in 1965, and in 1969 two prototypes were ready. The first of 105 Bruckenlegepanzer 1 Biber (Beaver) AULB were delivered in 1975. The Biber has a crew of two, the driver and the commander.

In 1965 a development program was started for a new self-propelled air defense gun system for the Bundeswehr. In 1973 an order for 420 Gepards was placed for the Bundeswehr. The First 195 vehicles, known as the (5PZF-) B2 and designated Flakpanzer 1 Gepard, were delivered, the remain­ing 225 were fitted with a Siemens laser range finder on top of the tracking radar radome installed to the turret front and are known as the (5PZF-) B2L, designated Flakpanzer 1 Gepard A1. 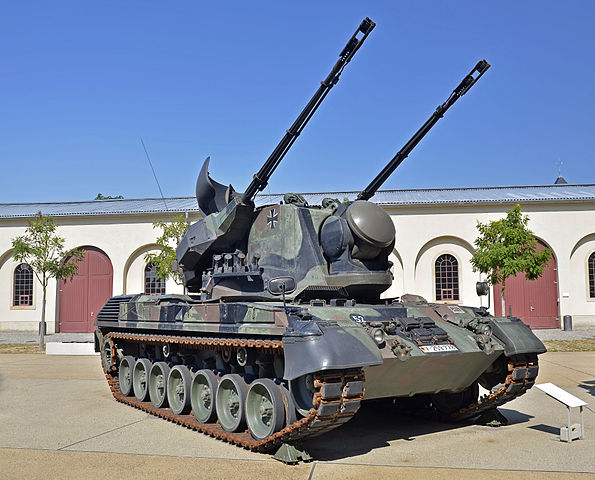